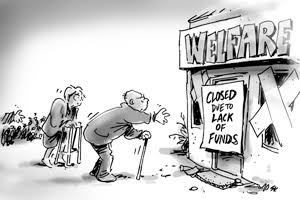 On Friday, The HC of Karnataka ordered the State government to immediately look into the grievance and issues which have been raised about senior citizens not being paid pension amounts.

Advocate Clifton D Rozario appearing for the petitioner argued that since January 2020, the pension payments of senior citizens are erratic and remain unpaid in most instances. This has caused them great hardship as, without these pension amounts that constitute their sole source of income, they are unable to purchase medication vital to their survival.

As per the Sandhya Suraksha Yojana and the Indira Gandhi National Old Age Pension Scheme for persons above 65 years an amount of Rs. 1,000 and those from 60-64 years at Rs. 600 are to be paid.

The plea states to address their plight (senior citizens), on 04.06.2020, representations were submitted by the petitioner to the Assistant Treasurer of the Government of Karnataka’s

Sub-treasury at K.R. Puram, the KR Puram Tehsildar, and all the District Coordinators for Bengaluru with a list containing the names, pension orders, P.P. ID numbers, and months for which pension has not been received by deserving beneficiaries who are retired senior citizens in the unorganized sector.

It was stated in the Representation about the difficulties faced by senior citizens in procuring medicines without their pensions, their lack of food and medical attention during the COVID-19 pandemic.

The plea states that senior citizens have been pushed to poverty and starvation over the course of the pandemic. It says that despite several complaints being raised regarding the timely disbursement of pension, the State has altogether failed to ensure that an effective mechanism is put in place for timely disbursal of pensions to senior citizens within the first weeks of every month.

It is also stated that State’s inaction is in violation of the Maintenance and Welfare of Parents and Senior Citizens Act, 2007.

The plea prays for directions to increase the monthly pension as directed by the Hon’ble Supreme Court at para. 51 of Dr. Ashwani Kumar v. Union of India [(2019) 1 SCC (LS) 465], in its judgment dated 13.12.2018. Direct the authority to release the pensions due to senior citizens since January 2020 with immediate effect to be delivered at their doorstep and to regularly release pension amounts.

The matter will be next heard on November 19.

On Friday, the Delhi high court stayed the criminal proceedings against Shashi Tharoor in connection with his statement that "a scorpion sitting on Shivling" remark ... Read More

A plea filed on the use of double-side printed A4 Size Paper for court work, Karnataka HC issues notice for the same.

A plea filed on the use of double-side printed A4 Size Paper for court work, Karnataka HC issues notice for the same. The Karnataka High ... Read More