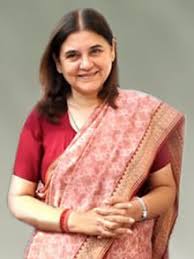 The Delhi High Court on Friday issued notice to the CBI on BJP MP Maneka Gandhi’s plea challenging a trial court order rejecting its closure report in a graft case against her and two others and directing further investigation in the matter.

Justice Yogesh Khanna also stayed the special court’s February 4 order to the extent it directs the agency to place the material it has before the sanctioning authority for her prosecution.

Ms. Gandhi, in her petition, has submitted that she most unfortunately has been targeted by a political opponent who has indulged in making false & frivolous allegations against her when she served as Union Minister of. State (Independent Charge) Social Justice and Empowerment in the year 1998 to 2001. The CBI lodged one FIR on 17.08.2006 U/s 120B r/w 420 IPC, and Sec. 13(2) r/w 13(1)(d) P.c. Act against the petitioner and some other persons and in pursuance thereof conducted an investigation and submitted a final report U/s. 173(2) Cr. P.c. on 30.12.2008 in the nature of a closure.

The then Special Judge CBI at Patiala House Courts while contemplating the said closure report directed for re-investigation which upon a challenge taken before this High Court, was modified to “further investigation”. The CBI again conducted further investigation and submitted a supplementary closure report U/s. 173(8)· Cr. P.c. on 29.05.2015. The CBI came to a categorical conclusion that there was no inculpatory evidence against the petitioner and hence prayed that the Special Judge CBI may close the case.

The Supreme Court on Thursday asked the Maharashtra Government to place on record the chargesheets that have been filed in relation to the lynching and ... Read More

High Court of Karnataka issues notice in petition to direct the authorities to establish a standard operating procedure (sop) for workers in factories and other establishments in view of the covid-19 situation:

The petition also stated to provide 14 days paid quarantine leave to those workmen working in factories who are not covered under ESI coverage if ... Read More

Kerala High Court held that Director Identification Numbers (DIN) of Disqualified Company Directors can be reactivated to avail the benefit of the Centre’s Fresh Start Scheme.

Justice Nagaresh emphasized that this Court is of the firm opinion that in order for the Scheme to be effective, Directors of the Companies ... Read More