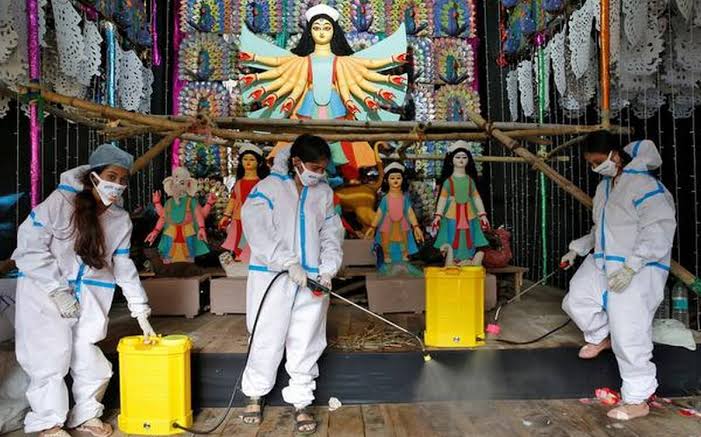 Including 3,000 within the jurisdiction of the Kolkata Police and an amount of Rs. 50,000 each was made available to 34,000 Durga Puja organisers in the State.

The Calcutta High Court on Friday refused to annul a government notification announcing disbursements to organisers of Durga Puja festivities across West Bengal.

A plea challenging the state government’s decision to distribute grants for a religious festivity, A Bench of Justices Sanjib Banerjee and Arijit Banerjee held so while hearing for the same.

An amount of Rs. 50,000 each was made available to 34,000 Durga Puja organisers in the State, including 3,000 within the jurisdiction of the Kolkata Police.

Finding that Durga Puja festivities could be used as a springboard for socially relevant programmes, the Court stated that there may not be any religious flavour to such secular programmes being pursued.

Calcutta High Court said, “It is also, prima facie, accepted that since Durga Puja may be the biggest festival in the State, irrespective of such festival being connected with a religious occasion, the festivities can be the spring-board for promoting socially relevant programmes and there may not be any religious flavour to such secular programmes being pursued.”

The order goes on to state, “The primary purpose in this case is, as indicated in the first recital, to strengthen the bond between the police authorities and the citizens and facilitating the involvement of women in assisting community policing activities. To such extent, the matter may not call for immediate interference, without a more indepth deliberation and consideration.”

The petitioner argued that such a disbursement for a religious festivity could be against the principle of secularism. Additionally, he assailed the grant as not being included in the budget.
Since it was not provided for in the budget, it would have to be viewed as expenditure defrayable by the State out of its revenues that could only be used for any public purpose, it was argued.

The State, on the other hand, asserted that provision for the same had in fact been provided for in the budget. The grant to Puja organisers, a sum of Rs. 40 crore, was specified under the police expenditure segment in the budget, the State averred.
It also submitted that the amounts were being used to strengthen the bond between the police and citizens, afford opportunities for women to participate in community policing, and procure safety equipment in and around Puja mandals.

The state government also explained that the notification declared an additional sum to be given as financial assistance. The additional amount was disbursed for the purpose of purchasing COVID-19 safety equipment, such as masks and sanitizers, it was elaborated.

The Bench found prima facie force in the State’s submissions, but clarified that the larger question of the propriety of the disbursements would be declared only two weeks after the Puja vacation. Discussing this question was necessary so as to ensure the repetitive exercise was not undertaken every September or October, the Court added.

Emphasizing that the grant was to be utilized solely for the purposes enunciated by the State, the Court stated:

“The funds are not meant for the augmentation of resources to conduct puja activities or for any musical soiree or for entertainment of the puja organisers or others.”

To drive the point across, Court directed that leaflets and handbills be printed with this information. The police personnel disbursing the sums were to ensure the handbills and leaflets were circulated before October 22.

The Director General of Police has been directed to file an affidavit of compliance by November 15.

Approximately 25% of the disbursement is to be used for strengthening the bond between police authorities and the citizens and for facilitating the involvement of women in assisting community policing activities. The remaining sum is to be utilized towards safety equipment.

The matter is expected to be taken up two weeks after the end of the Durga Puja festivities in the State.

The Apex Court has quashed the life imprisonment sentence given to a person accused in a 1981 murder case noticing that he was less than ... Read More

A petition is filed in front of the Supreme Court which demands Video Recording or Live Telecast of Court Proceedings in Prashant Bhushan contempt case. ... Read More

Report submit by the Government of Delhi that the women are more likely to be get infected than men: Sero-Surveillance

on 30 September, the Delhi Government submits its third sero-surveillance report before the Delhi High Court which states about sero-prevalence of COVID19 is found more ... Read More