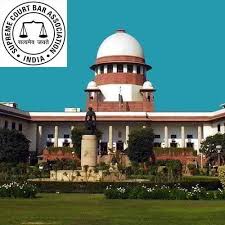 Bar Association of Apex Court has criticized the action of the Chief Minister of Andhra Pradesh of making allegations against Justice N.V. Ramana in front of the public

The Supreme Court Bar Association has criticized the action of the Andhra Pradesh Chief Minister Jagan Mohan Reddy of making allegations against Justice NV Ramana in front of the public.The president of Supreme Court Bar Association Mr Dushyant Dave stated that he has kept himself aside from being part of the resolution that condemns Reddy’s actions.

The Supreme Cour Bar Association has stated that Chief Minister Jagan Reddy holding a constitutional post ought not to have taken such a step which is likely to impact the independence of judiciary.

The resolution of the SCBA signed by the Acting Secretary Rohit Pandey says that Such actions by constitutional functionaries are opposed to conventions causing serious inroads impacting the independence of judiciary as enshrined in the Constitution of India.

The president of Supreme Court Bar Association has conveyed his inability to participate in this resolution to Acting Secretary, on grounds of principle. He says that Reddy’s letter is addressed to the CJI and makes certain accusations against a sitting Judge. While the veracity of these allegations are unknown, the truth can only come to surface after due inquiry, if conducted.

At this stage we all are demanding for the inquiry. I am sure at the end of inquiry truth will emerge and if allegations are found false, SC must initiate contempt proceedings against the CM. Today it is premature to pass the resolution much less of the kind you all propose.

High court of Delhi told University of Delhi to quickly find a mechanism and process for issuing certificate of Degree in digital Form along with ... Read More

On Friday, Apex Court ruled that the right to residence to a married woman, guaranteed under the domestic violence law, will apply in civil cases ... Read More

On Tuesday Allahabad High court granted protection to Supriya Sharma from arrest, Executive Editor of Scroll.in, and also the Editor in Chief of Scroll.in, in ... Read More

NEWER POSTSupreme Court during granting bail to the accused in the case of Dongri building collapse has stated that BMC was sleeping when the wrong construction of buildings was going on
OLDER POSTPlea has been filed by thr Republic T.V. in front of the High Court of Bombay challenging the FIR of Mumbai Police in case of fake TRP scam